The mail archiving system at lore.kernel.org uses public-inbox, which relies on git as the mechanism to store messages. This makes the entire archive collection very easy to replicate using grokmirror — the same tool we use to mirror git.kernel.org repositories across multiple worldwide frontends.

It doesn't take a lot to get started. First, install grokmirror either from pip:

or from your distro repositories:

Next, you will need a config file and a location where you'll store your copy (keep in mind, at the time of writing all of the archives take up upwards of 20GB):

Save this file into lore.conf and just run:

The initial clone is going to take a long time, but after it is complete, consecutive runs of grok-pull will only update those repositories that have changed. If new repositories are added, they will be automatically cloned and added to your mirror of the archive.

Note: this by itself is not enough to run public-inbox on your local system, because there's a lot more to public-inbox than just git archives of all messages. For starters, the archives would need to be indexed into a series of sqlite3 and xapian databases, and the end-result would take up a LOT more than 20GB.

We are hoping to fund the development of a set of tools around public-inbox archives that would allow you to do cool stuff with submitted patches without needing to subscribe to LKML or any other list archived by lore.kernel.org. We expect this would be a nice feature that various CI bots can use to automatically discover and test patches without needing to bother about SMTP and incoming mail processing. If you would like to participate, please feel free to join the public-inbox development list.

When news of the TCP_SACK panic vulnerability came out, we followed much of the world in applying the “sledgehammer” mitigation until updated kernels become available and we have a chance to perform updates and reboots:

This has largely gone without any significant impact, except in one very specific configuration in AWS, where a TLS Listener is attached to an NLB. Normally, you'd use an ALB, not an NLB for https termination, but in this particular case we needed to serve both https and gitd traffic from the same IP address, which is difficult to achieve with an ALB.

Shortly after turning off tcp_sack, our external monitoring service started reporting intermittent availability alerts for the https endpoint — the check would fail once every 10 minutes or so, but then almost immediately recover. All other checks for that server were reporting green, so the sysops on-call staff ascribed this to the fact that the server is located in the ap-southeast-1 zone, which routinely sees high latency and blips in availability when monitored from North American endpoints.

However, after the situation had persisted for over 24 hours and we started receiving complaints from the clients, it became clear that something was going wrong with TLS termination. Since the only change done to those systems was the tcp_sack modification, that was the first thing we rolled back, with immediate dramatic results: 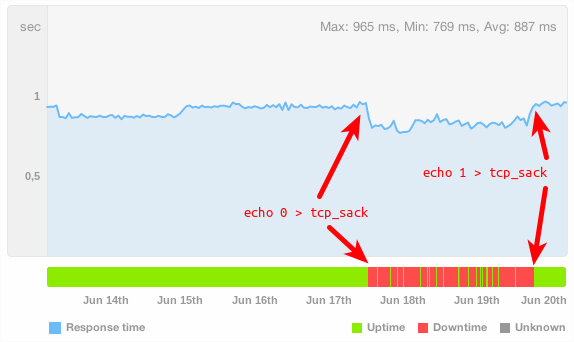 The graph is a bit misleading when it shows near-solid red, because availability appeared to be very intermittent and was more apparent with some web clients than with others — e.g. accessing the site with Firefox almost always succeeded (needless to say, when the site “obviously works just fine” as far as the troubleshooter is concerned, that seriously muddles the issue).

From what we can surmise, if the client didn't immediately send the payload after completing the TLS handshake, that tcp session had a high chance of eventually timing out. I'm not 100% sure where tcp_sack fits into the exchange between the AWS NLB+TLS and the EC2 instance, since we have no visibility into any tcp traffic after it leaves the box, but obviously it makes use of selective acks, or it wouldn't have had such a dramatic effect when we turned those off. We equally have no explanation why check latency dropped by 100ms during the same time period.

Unfortunately, we couldn't afford to keep the affected systems in their broken state for in-depth troubleshooting, but hopefully this experience is useful to others facing similar issues.

Ever since the demise of Google+, many developers have expressed a desire to have a service that would provide a way to create and manage content in a format that would be more rich and easier to access than email messages sent to LKML.

Today, we would like to introduce people.kernel.org, which is an ActivityPub-enabled federated platform powered by WriteFreely and hosted by very nice and accommodating folks at write.as.

There were many candidates, but we chose WriteFreely for the following reasons:

How is it different from kernelplanet.org?

The Kernel Planet is an aggregator of people's individual blogs. The main distinction of the Planet site from people.kernel.org is that the authors here write on topics having to do with Linux and technology in general, while there are no such restrictions in place on the Kernel Planet. You are certainly welcome to follow both!

At this time, we are aiming to roll out this service to a subset of high-profile developers, and the easiest way to do so is to offer it initially to those folks who are listed in the MAINTAINERS file.

That said, if you are not currently in the MAINTAINERS file, but think you can be a great writer for people.kernel.org, then you can simply ask someone who is in that file to “sponsor” you. Simply add them to a cc on your invite request.

See the about page for full details.